Start a Wiki
Heaven-Piercing Giga Drill is the 10th track on Area 11's debut album All The Lights In The Sky. It was the second single to be released off the album. The song was originally included on the Blackline EP as the 3rd track. It is heavily inspired by and contains many references to the anime series Tengen Toppa Gurren Lagann.

The song was re-recorded for it's inclusion on ATLITS. Parts of the song had to be re-worked due to the departure of Luke Owens.

On 24/11/13 (a day earlier than planned), the Heaven-Piercing Giga Drill Single was released along with the re-recorded All The Lights In the Sky , Movement 4 of Bosozoku Symphonic, as it's B-side. This version was a re-recording of the ATLITS version and included heavier bass, auto-tuned backing vocals, and vocal samples from many Elevens, who were asked to send in a vocal clip of them yelling the line "who the hell do you think we are!?"

A dubstep remix by Echo Inada was released on the Fan Subs EP, along with a video of a few band members sitting on a couch listening to the song.

A piano version of the song was uploaded on to the Area 11 SoundCloud  before being taken down due to the release of the Go!! Fighting Action Power single where it features as the second track, as well as on Disc 4 of All The Lights in the Sky「COMPLETE」 .

For the Blackline version of the song, the band created a half live-action half Minecraft video for the song. The video begins with the end of a rehearsal session in which the band enter a Minecraft style wooden door. They then find their way to a stage surrounded by zombies where they play HPGD, until creepers invade and blow everything up. The video ends with the band escaping but leaving Sparkles* behind. This sets the scene for Gigacraft.

The video itself provides several interesting clues or things to think about. For a start, there are several characters within the video that are not zombies or generic people and actually are players with various skins. One of them appears to resemble Ash Ketchum from Pokemon, whereas the others are harder to identify. One of them looks as though it could be Kamina from Gurren Lagann.

There is a possibility that they have been made to look similar to the skins used by the band in the video, however they may be of great importance, or they could just be pop culture references of no significance. 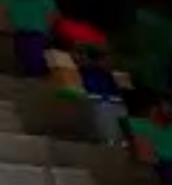 On the 15/11/13 Area 11 confirmed on their website that they would be releasing Heaven Piercing Giga Drill as their last single from All The Lights In The Sky to say goodbye to the album, on the 25/11/13. This had been in the works for a while since asking fans to be part of the new song. It was then released a day earlier (24/11/13) with a music video. Along with the new single they released a B-Side of a full length version of All  The Lights In The Sky and an off-vocal track of Heaven-Piercing Giga Drill. The full length version of ATLITS features strong drums, bass and guitar that the original version didn't have.

The video for the single version (released on Bandcamp a day early on 24/11/13) features the band playing in a studio with glitch effects and colour shifts on the video. The band did 2 days shoots of the video, one on white surfaces and one on black. As the video goes on the glitching effects get more intense and start to flash quickly between the black and white shots and  to old recordings of the band from various different places. These include the Shi No Barado music video, 11 Minutes With Area 11, the teaser video for the album, live videos and Reply Boyz.

Look up!
All the lights in the sky are stars!
Reach out with your fist!
Let’s demolish the tower
We are complete, our souls are fused
My drill will pierce through - Go!

Believe in me, who believes in you
My drill will pierce through.

Retrieved from "https://digitalhaunt.fandom.com/wiki/Heaven-Piercing_Giga_Drill?oldid=19416"
Community content is available under CC-BY-SA unless otherwise noted.